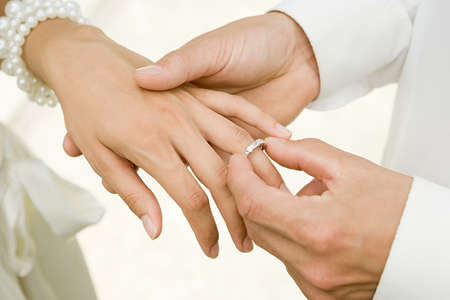 Ahhh, the romance of the ring. But how did it become a marriage symbol, and why is the fourth finger of your left hand the lucky recipient? Here are the history, traditions, and purported powers of engagement and wedding rings.

It is believed the Pharaohs of Egypt first used the circle, a shape with no beginning or end, as a symbol of eternity, but wearing a ring as a public pledge to honor the marriage contract did not become customary until Roman times. The earliest rings were made of simple iron, but gold rings set with gems were fashionable by medieval days. The most popular gems were symbolic — a red ruby was the color of the heart, a blue sapphire reflected the heavens — but the most coveted and powerful gem was the indestructible diamond.

The word “diamond” is derived from the Greek word adamas, which means “the unconquerable.” As Mother Nature’s hardest substance, diamonds represented invincible strength, a fitting gem for the marriage covenant. But the real pull of these sparkly stones — which ancient Greeks believed were delicate splinters of fallen stars — came from the powers and protection they offered the wearer. In India, where diamonds were first discovered, they were thought to be a shield from the combined forces of evil (which at that time included snakes, poison, and theft). Ancient astrologers believed diamonds promoted lasting love and warded off witchcraft and nightmares. Associated with everything from innocence to sexual power to all-encompassing protection, you can see why the diamond became the betrothal gift of choice for lads and ladies.

Blame it on Archduke Maximilian of Austria, who started the diamond ring trend in 1477 when he presented one to his beloved, Mary of Burgundy. The tradition of wearing the engagement ring and wedding band on the fourth finger of the left hand can be traced to the Egyptians, who believed the vena amoris (vein of love) ran directly from the heart to the top of this finger.

Dual-ring ceremonies, in which both bride and groom wear a ring, were introduced by the Greek Orthodox Church in the 1300s. The custom didn’t catch on in America until the beginning of World War II, when young men were forced to leave their beloveds behind, not knowing when and if they would return. Many couples married in anticipation of separation, and wedding bands — one for each partner — were considered critical to the war effort, as a solace to lonely soldiers and as a reminder for brides that their faraway soldier thought of them always. By the height of the war, 85% of marriages were dual-ring ceremonies. And of course, they continue to be today — and we’re more attached to our wedding bling than ever before.